Indian Army’s T-90 Bhishma tanks that have been deployed in Ladakh amid tensions with China were seen in action striking targets with precision alongside a US Navy brigade that has served in Iraq and Afghanistan as the two armies carried out war games in the Thar desert.

The US Army with their Stryker armoured vehicles paired up with the Indian infantry troops of the Jammu and Kashmir Rifles to conduct a mock terror operation, flushing out terrorists from their hideout in an imaginary village that has been taken over by a rebel group.

From-50 degrees in Ladakh against China to 50 degrees in the deserts to challenging Pakistan, the lethal T-90 has always proven its mettle. The Indian and the US Army were war-gaming several scenarios of counter-terror operations in the Mahajan Field Firing Range in Rajasthan. The exercise ‘Yudh Abhyas’ started on February 8 and will be concluded on February 21.

The operation named ‘Zorawar’ depicts the anti-terror scenario in semi-urban and urban settings.

The US Army’s Ghost Brigade located in Joint Base Lewis-McChord near Seattle, which was involved in Iraq and Afghanistan operations, was part of the exercises with the Indian Army.

It has served in Iraq and Afghanistan and more recently was part of operations in Mosul, north Iraq, that had been the hub of terror group ISIS. 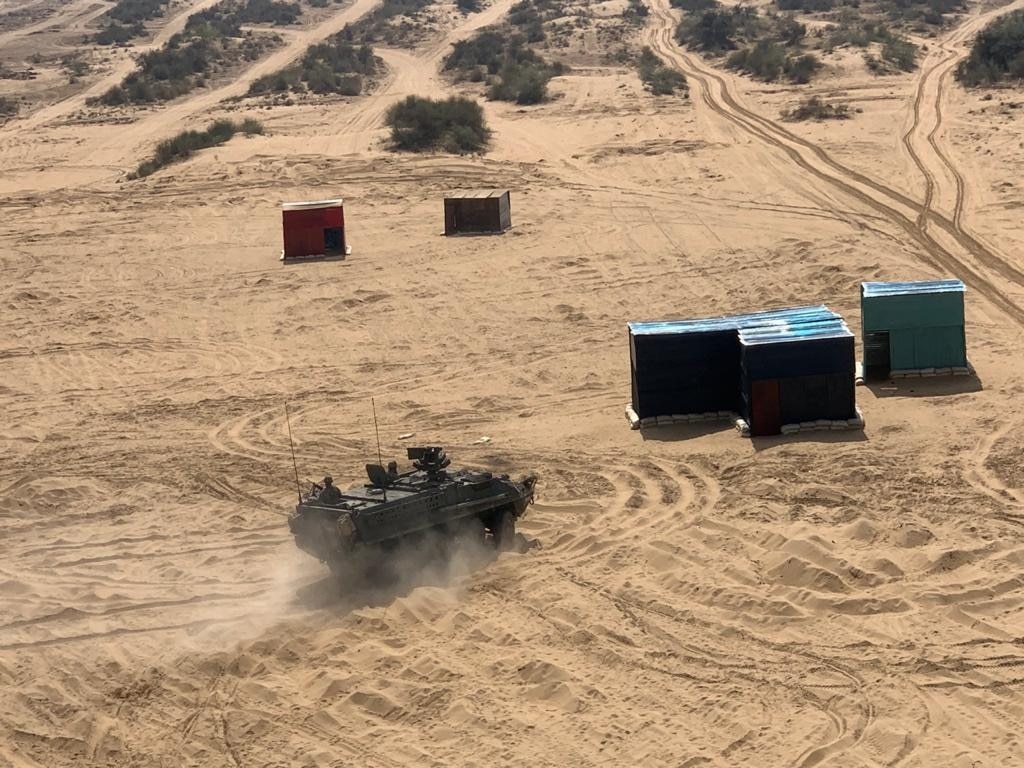 The Ghost brigade with its Stryker armoured vehicles got its name back in 2003 in Iraq as it was able to carry out operations silently. The Stryker vehicle that carries troops close to the target area almost silently without the enemy getting a whiff adds to the stealth capabilities of troops on the ground. The element of surprise, many say, is almost ghost-like.

“In Iraq, we gained a reputation for quickly and quietly approaching the enemy and insurgent areas. We would strike the enemy before they even knew what hit them. So, we came to be called the Ghost bridge and our motto became arrive in silence,” said Maj Spencer Garrison of the US Army who is part of the brigade.

Air support for troops on the ground

Also in action were the US-manufactured Apache attack helicopters and the Chinook heavy-lift choppers being used by the Indian forces. 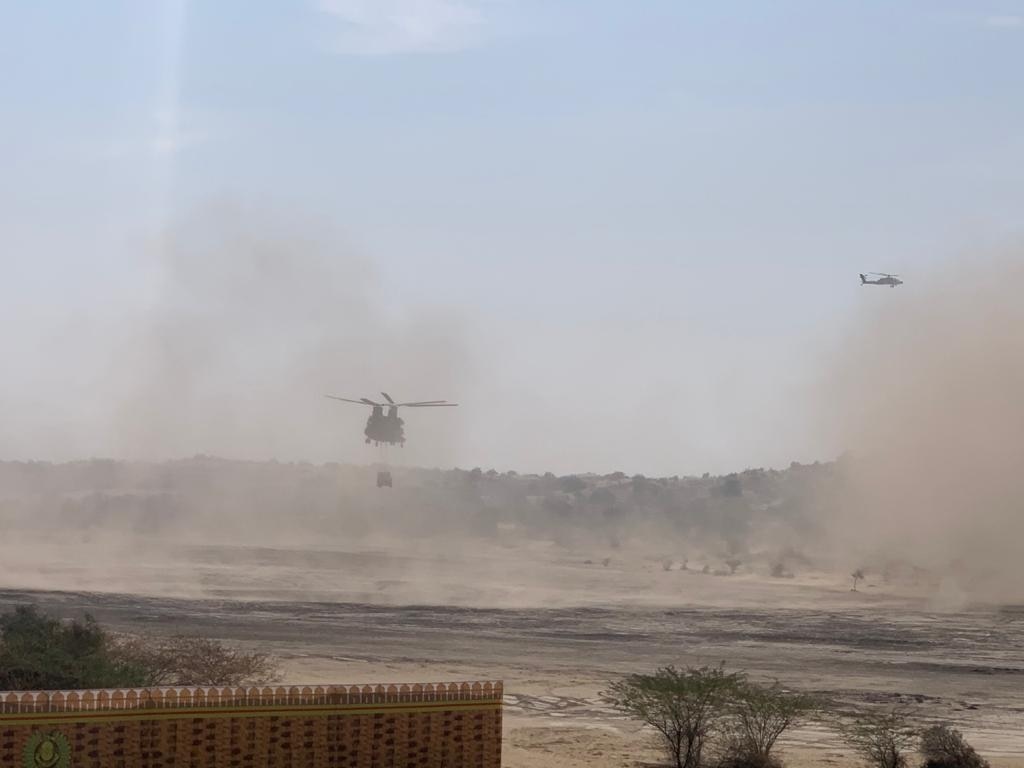 Both the helicopters played a key role in Ladakh during the tussle with China. While the Apache was ready for combat missions carrying out multiple sorties to be battle-ready, the Chinook undertook several sorties in a day transporting men and material to the forward locations.

During the exercise as Indian special forces personnel were airdropped from a Mi17 helicopter, the Apache hovered around giving cover to the transport choppers as the troops slithered down amid a fog of sand. In the end, it was not just the firepower on the ground but also from the air. The Indian Army’s Rudra combat helicopters launched a final assault from the air. The choppers threw open a volley of fires from the air hitting the terror dens in the mock exercise before the troops could finally zero in on the ground and declare the area free of terrorists. 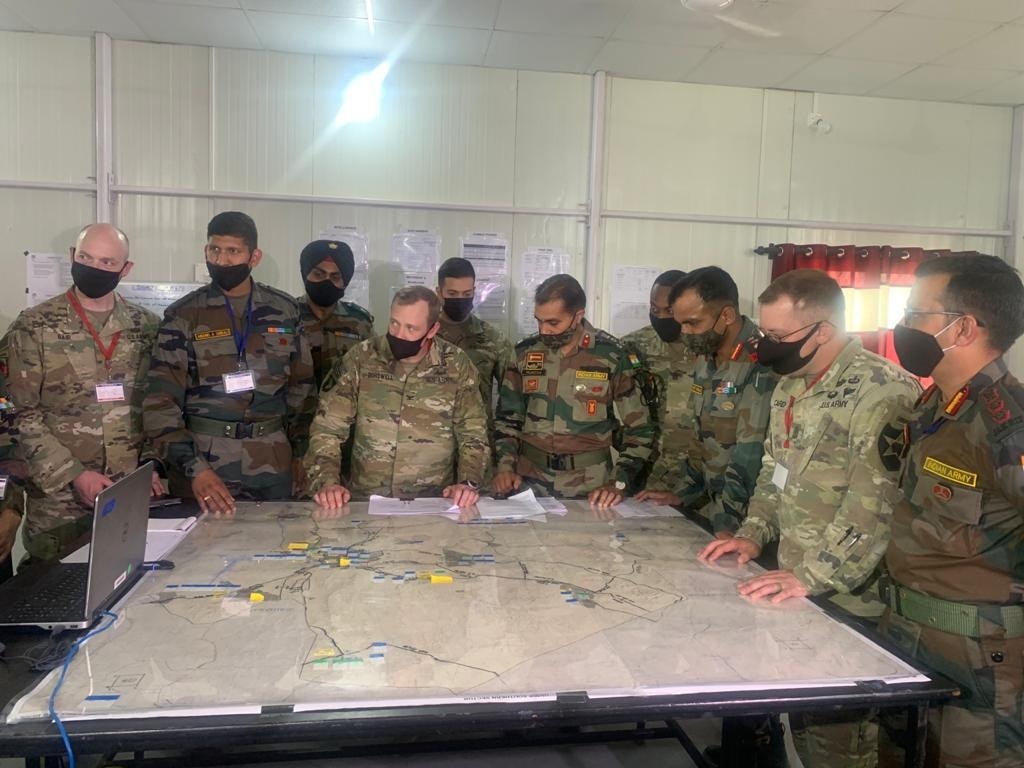 Tactical meeting of officers from both sides. (Photo: India Today)

This was the 16th edition of exercise ‘Yudh Abhyas’. The drill has been named Zorawar in honour of legendary Dogra military commander General Zorawar Singh, popularly known as ‘Conqueror of Ladakh’.

The focus of the drill was counter-terror operations and the two armies carrying out familiarisation and handling of weapons, battlefield trauma management, casualty evacuation and counter IED drills. Troops from both armies share a meal after an all-night-long operation. (Photo: India Today)

Talking about counter-terror joint drills, Major Sameer Puri of the US Army said, “We should maintain the high level of professionalism. We should expand more such drills so that we can integrate more staff functions.”

Major Puri said terrorism is the biggest threat to the world and it should be countered strongly. “We have learnt a lot during the exercise,” he said.

“We were welcomed with open arms. The hospitality was more than even dreamed about. It is a great experience to have shared understanding with the Indian Army,” said Captain Alicia Brown also part of the US delegation.

How India will deal in Afghanistan post US withdrawal

Exclusive: What is Project 75 Alpha & Why does India Need 6 SSN?

How India will deal in Afghanistan post US withdrawal

Deadly blast in the parking lot of a Balochistan hotel at Quetta, Chinese Ambassador escapes